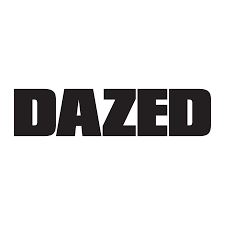 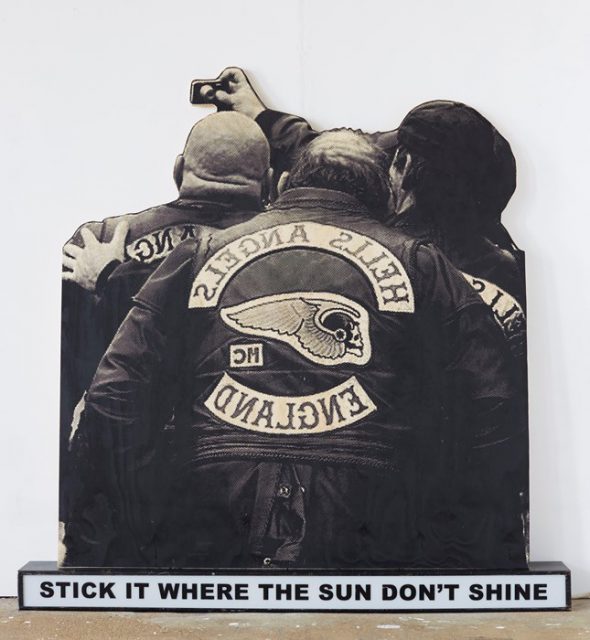 In the year, or so I’ve known Kingsley Ifill, he’s had two completely different studios. The first I experienced, was a hybrid gallery-come-pool-hall where he hung his paintings around a snooker table in a little space in east London, with just enough room to squeeze in a comfy leather couch and a coffee table littered with his zines and home-made books. In his own words, all that happened was he drank beers and played pool and hardly got any work done at all. This time round, his productivity level has violently swung in the opposite direction, he’s now occupying a disused British Legion pub on the waterfront in Herne Bay where he grew up. This massive space is filled with books and printers and screens and paintings: he’s even knocked up a makeshift darkroom in one of the old loos.

“Ifill’s distinctive marrying of instantly recognisable branding, meme image, humorous pun or inside joke presents a cacophony of layers by which to approach each work”

Surrounded by his books, Penny the dog and his printers, Ifill has been slaving away on a series of paintings for an exhibition at Cob Gallery in Camden this September. Titled Stutter and curated by filmmaker and photographer Tom Beard, the exhibition sees the artist bring together a colourful mixture of existing paintings and new work. In colliding found images emblazoned with corporate trademarks, fruit machines for sale on Ebay or “mugshots” of judges scattered with tromp-l-oeil BB-gun bullet holes, Kingsley’s monolithic screen-printed canvases unite the obscure and familiar in eloquent challenges to capitalist society, consumer culture and even the ontology of the contemporary image itself.

The digital image, in its endless reproducibility, purports the capacity to develop and accumulate new meanings each time it is used. In particular, the online image glut constantly swells, enlarging its terrifying abundance of content like some sort of toxic blob enveloping entire towns in single gulps from a 1950s horror movie. While many of Ifill’s images were sourced online in an instant, he imparts a mechanical and time-consuming process to transform them into unique paintings. Developing an ongoing fascination with outdated analog technologies, Ifill’s process incorporates multifarious procedures in a combination of screen-printing, photography, xeroxing, inkjet printing, the list goes on. As if restoring the artwork its auratic faculty, Ifill takes a valueless image from the internet and manipulates it into a complex visual arrangement or direct and often colossal painting, paradoxically feeding it back through defunct mechanisms, themselves initially created to induce and support the mass-reproduction of images. Of course, while in terms of process and content, no artist is without his precursors, Ifill’s distinctive marrying of instantly recognisable branding, meme image, humorous pun or inside joke presents a cacophony of layers by which to approach each work. 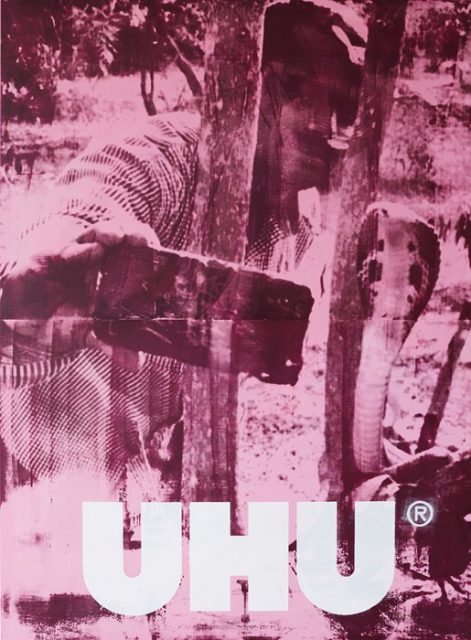 You not only know more about printing than anyone I’ve ever met but you also actively engage in so many types of printing… You have a darkroom, a C-41 processor, various gigantic printers, a couple of photocopiers lingering around, the list goes on without even mentioning the hundreds of screens you have in every nook and cranny in your studio. How did you get into printing? Did it start with photography?

Kingsley Ifill: It started with faking bus passes for my friends when I was about 12. My dad had a colour fax machine which was more like a mini photocopier. Now looking back it must have been a pretty modern one for its time. I can’t remember why it was in my room as I lived in the loft, but somehow it was there and I had access to it. Maybe the phone line came through the roof of the house. I can remember the nervousness and anticipation of each print, the preciousness of the ink and the buzz of when it came out how you wanted it. Then, yes, fast forward a few years, later I found that feeling again printing photos in the darkroom and I guess it’s no different with the combination of processes I’m working with right now. 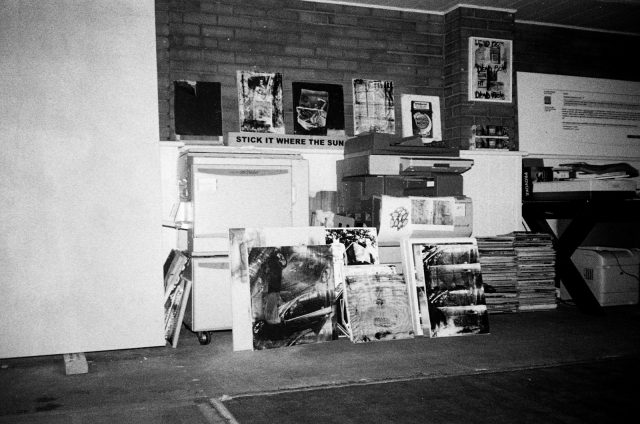 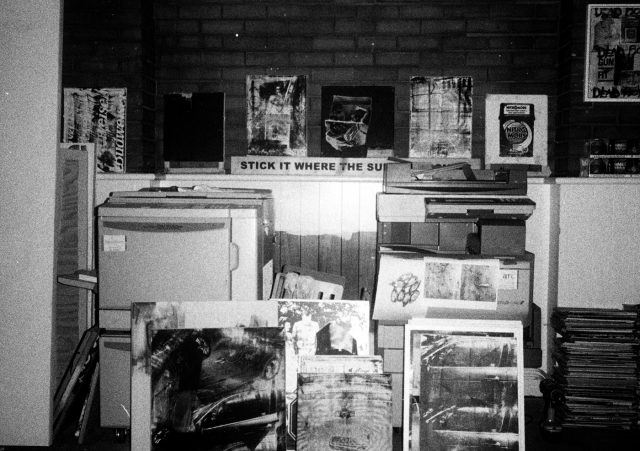 When I came to your studio I was so enthralled by your book collection. I love visiting artist studios precisely because I get to see bits and bobs around that inform their work, it makes them easier to understand, not to mention the work. Sometimes it even helps the work gain complexity. Which books do you continually revisit, and why?

Kingsley Ifill: Japanese Photobooks from the 60s and 70s. I saw the show at the Photographer’s Gallery and it completely changed my interpretation of imagery and the possibilities that lie within. Prior to seeing the exhibition, I was looking at a lot of photography produced in the Soviet Union, often wondering how the external reality of that era had influenced the imaginations of the people. There’s a line I heard recently which was ‘deprivation equals appreciation.’ Going back to the Japanese photographers, I can’t imagine what it was like living in that period post-Hiroshima however, it’s inspiring to think that like in many forms of martial arts, they used the negative forces that acted against them to produce something positive. 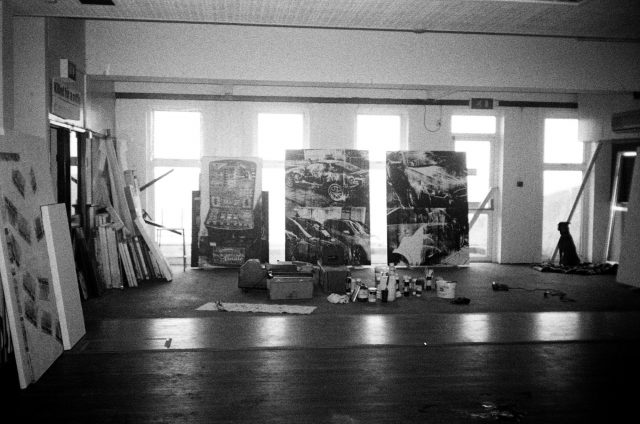 You went to Cob last week to figure out how your work will fit in the space. How are you translating the work from your pub-studio to the gallery space? Are you gonna go big? Is the bigger the better?

Kingsley Ifill: There was a framed napkin in David Hammons’ recent retrospective where he’d used a pen to change ‘airline’ to ‘art’ and it says ‘building a better art, not just a bigger one’. Nail on the head – bigger isn’t always better. For me personally, I started to explore scale recognising the limitations I have working alone with screens that are almost as tall as me, confident that the end result would be something I hadn’t experienced before making smaller work with more control. The show is half-and-half, small and large, a couple in between. In terms of some kind of translation between spaces, I guess the proof will be in the pudding and I won’t know until everything is hung, but I’m definitely looking forward to seeing everything interacting in the traditional white sterile environment of a gallery away from the distractions of the old pub I work in. 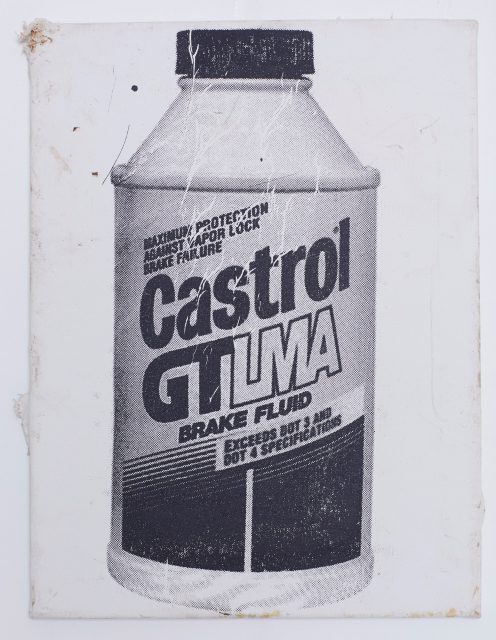 What ratio of found images versus your own photos appear in the work? How do the former, an image found online or in a book or magazine, whether one that’s relatively obscure – an advert selling a fruit machine for example – or one that’s gone viral like those of the soldiers abusing inmates in the military detention camp affect the work? That sounds long-winded. I guess what I am trying to ask is: does the use of found images make visual art more relatable or does it totally depersonalise it?

Kingsley Ifill: Does posting a photo of yourself publicly onto the internet make you more relatable or does it depersonalise you? I’m not sure. Generally, when selecting an image, I do so in a similar way to how a more traditional painter working from a palette might select a colour. Whatever appeals at that moment, building on what came before and what you hope will come after. With images taken from elsewhere, I generally ignore all information other than my interpretation of the image, focusing on the charge which I think it may hold and it goes from there.

“Working within several alternating systems or processes, quite simply, I add and add, combining whatever is around me, until it feels right” – Kingsley Ifill 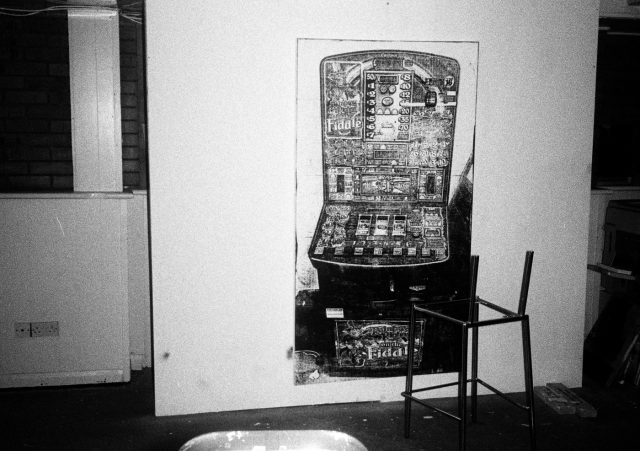 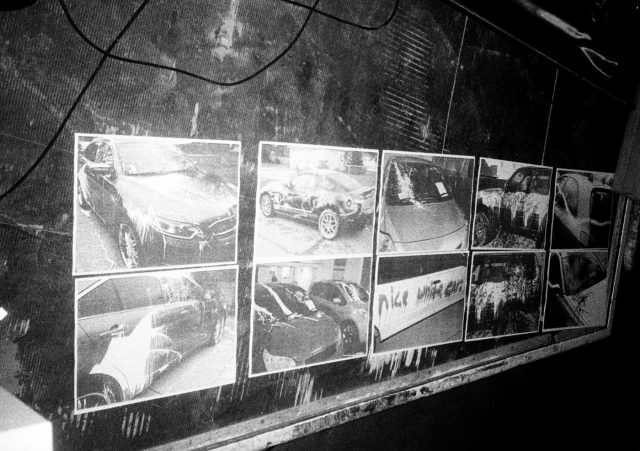 You turn these endlessly reproducible images into one-offs, using various “outmoded” imaging techniques. But, there is something in your layering of materials and printing that reminds me of the layers in Photoshop for example. Do you intend to make any comment on our contemporary attitude towards the image, or digital imaging technologies?

Kingsley Ifill: On a whole, the answer to that would be yes. If you wanted to talk about particular comments, we’d have to talk about a particular work. And the work changes every day along with the comment. If I could write to explain it, I wouldn’t make a picture. If I could make a perfect picture, I wouldn’t need to explain it. He shells sells hells shells sells sea shore sea saw, st st stu stuu stutter stutter stutter. Some people think that they know what they want to say but they don’t know how to say it. Up until I was about 25 I spoke so fast that nobody could understand what I said. Instead of repeating myself, I just wouldn’t speak. It’s my understanding that we’re entering a period of heightened self-awareness. Along with this comes the confusion of how one expresses themselves. A stutter can sometimes sound like music. 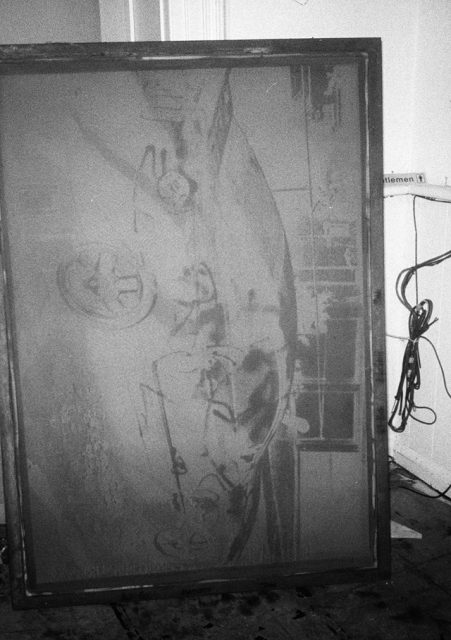 Can you explain the relationship image and text have in the screen prints, for example in the UHU paintings. I know you’ve said UHU references a common, colloquial call to attention as well as the glue, holding everything together. What about “Stick it where the sun don’t shine,” “Hubba Bubba,” “Get a job you dirty hippy” or the subtly peeking out “You can’t win” in another painting? Does the text add humour, or is its role more ambitious, asserting a political or social commentary? What do all these have in common, basically?

Kingsley Ifill: Working within several alternating systems or processes, quite simply, I add and add, combining whatever is around me, until it feels right. Whether the content be interpreted as humorous or something more serious is ultimately up to the viewer. “You Can’t Win” is a book I read. “Hubba Bubba” is a gum I chew. I’m not even sure where the “Get A Job” image came from but I know I was playing around with pepper spray on the day I saw it. And as for UHU, it leaks all over the drawer I keep my pens in. What do all these things have in common? They’re here in front of me. What’s the point in putting them together? To look for something new. 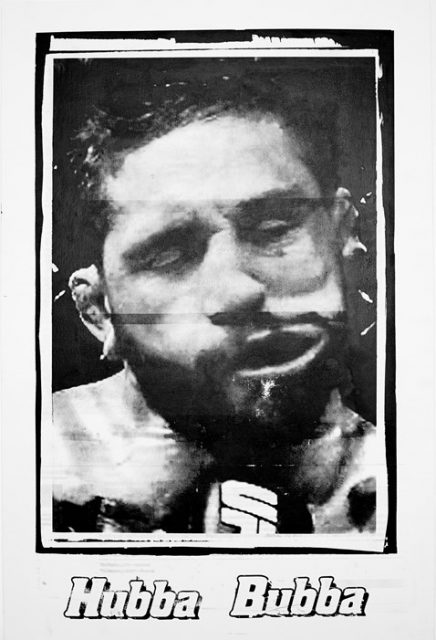