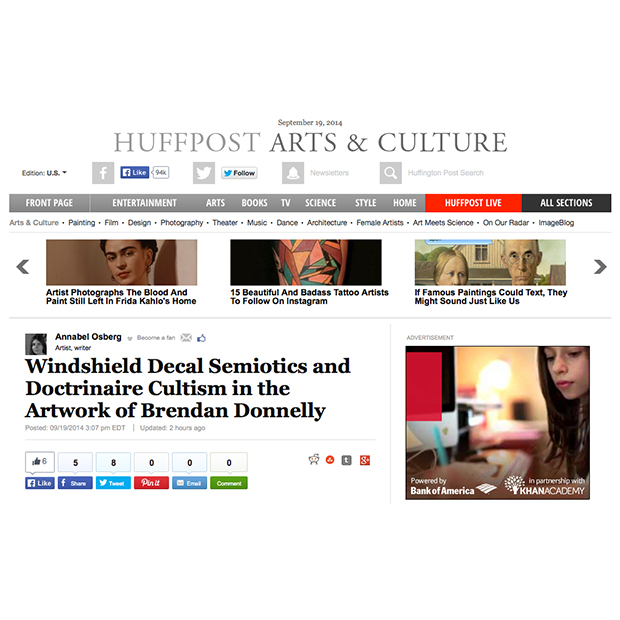 The title of Brendan Donnelly’s first exhibition at Paul Loya Gallery, “How To Be A Magician In Your Spare Time,” is something of a misnomer–the show has little to do with magic. However, the emptiness of the titular promise is itself an ironic trick in keeping with the artist’s skepticism of magisterial charlatanry.

Lining the gallery walls are several car windshields overlaid with amusing assortments of decals, many of them designed by Donnelly himself. The carefully curated arrangement on each windshield portrays a different hypothetical character or group of characters that is humorously caricatural in its stereotypic extremism, yet not completely unbelievable. The decals on a screen ostensibly belonging to a right-wing radical, for example, reek of sexist vulgarity, white suprematism, and love of guns. A Rastafarian’s stickers are all red, yellow, green, and black. Another windshield is peppered with stickers having to do with being Irish and drunk. Installation view, “How To Be A Magician In Your Spare Time.” Image courtesy of Paul Loya Gallery. Initially, each windshield seems to stand out in clamorous divergence from all the others. However, the comparatively superficial differences in lifestyle, creed, and ethnicity belie a more significant common denominator among these hypothetical characters. The cocksure blatancy in each assortment evinces a mixture of self-pride, strong convictions, and often, scorn. Donnelly’s installation is a reminder that no one is immune to judgment; and the more one celebrates one’s own predilections and prejudices, the more one is subject to the bias of others.

The fundamental similarity among these stereotyped characters is echoed in their appropriation of one another’s symbols. Clichéd motifs from some groups are appropriated and recycled by others, whether in ironic opposition with the motif’s original meaning or in modified accordance with it. For instance, the Confederate flag design is reinvented in rainbow colors as the “Rainbow Rebel” flag to represent gay pride. On other windshields, the same design is seen in Rastafarian colors or Irish colors. Recycling a popular symbol heightens the arbitrary relationship between the symbol and its meaning; but it also blurs the boundaries dividing each faction using the symbol. The only features distinguishing a Confederate flag from a “Rainbow Rebel” are color and a few background stripes. Each reuse pushes the symbol closer to becoming an empty shell to fill with the meaning of one’s choice, eventually sending the original symbol and its reinvented successors into a hackneyed state of oblivion.

Beyond the windshields, in the back of the gallery stands an imposingly tall chain-link National Rent-a-Fence in three parts, each parallel to one of the gallery walls. Attached to the fence are several black and white paintings, dark and poster-like on unstretched canvas, bearing cryptic slogan-like text coupled with equally mysterious pictures. The style of these paintings is borrowed from Chick Publications, a popular brand of evangelical Bible tracts; but the parody isn’t directed so much at religion as at the dogmatism often associated with it. Installation view, “How To Be A Magician In Your Spare Time.” Image courtesy of Paul Loya Gallery.

“The Greatest Story Ever Told,” whose text is directly copied from a Chick leaflet of the same name, depicts Walt Disney’s severed head smoking a cigarette as it falls into a chasm underneath Sleeping Beauty Castle, which is haloed by a ring of hypnotic concentric circles extending into the sky. The simplicity of the drawing calls attention to the relationship between crosses and Mickey Mouse logos on the castle turrets, simultaneously burlesquing both Disney worship and religious groups’ boycotts of the brand. “Life sucks, then you die,” reads the text next to an image of a big skeleton resting its elbow on a child skeleton’s skull. “Then you’re reincarnated and life sucks again.” Generally, religion is supposed to provide hope and comfort to its believers; the idea of life after death is usually considered positive. Donnelly satirically points out that should one not enjoy life, the idea of eventual death could actually be comforting; the idea of reincarnation, an exhausting vicious circle. Whereas his windshield pieces represent misguided senses of anti-establishment individualism on the part of people who are actually members of classifiable cliques, Donnelly’s fence installation is redolent of the shortcomings of cultish doctrinaire propaganda and the resulting delusional melancholia of its jaded proponents and followers. As a whole, the show unmasks contradictions and duplicity inherent to any kind of extremism or unquestioning adherence to dogma. Yet at the same time, it alludes to the fact that we are all opinionated to some degree. Through his work, Donnelly cautions against feeling too certain.

“How To Be A Magician In Your Spare Time” is on view from September 6-October 25, 2014 at Paul Loya Gallery, 2677 S. La Cienega Blvd, Los Angeles, CA 90034. For further information, see paulloyagallery.com 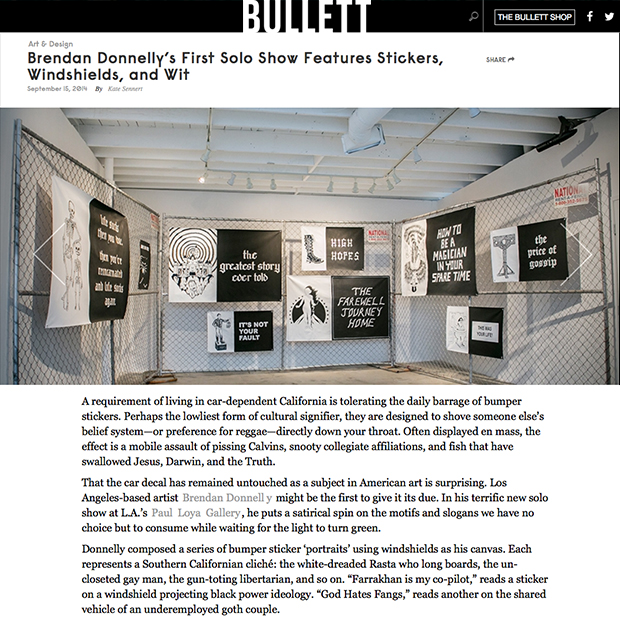 A requirement of living in car-dependent California is tolerating the daily barrage of bumper stickers. Perhaps the lowliest form of cultural signifier, they are designed to shove someone else’s belief system—or preference for reggae—directly down your throat. Often displayed en mass, the effect is a mobile assault of pissing Calvins, snooty collegiate affiliations, and fish that have swallowed Jesus, Darwin, and the Truth.

That the car decal has remained untouched as a subject in American art is surprising. Los Angeles-based artist Brendan Donnelly might be the first to give it its due. In his terrific new solo show at L.A.’s Paul Loya Gallery, he puts a satirical spin on the motifs and slogans we have no choice but to consume while waiting for the light to turn green. 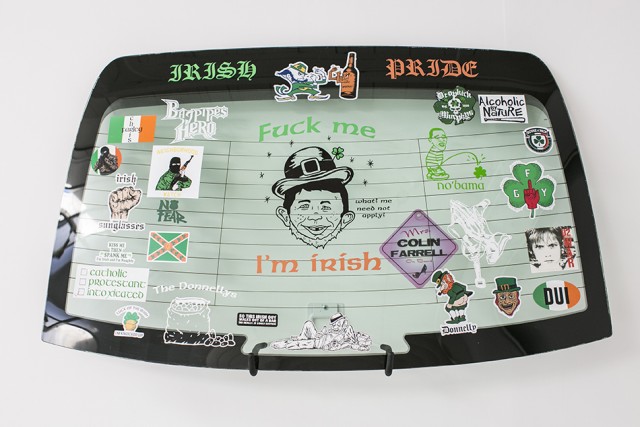 Donnelly composed a series of bumper sticker ‘portraits’ using windshields as his canvas. Each represents a Southern Californian cliché: the white-dreaded Rasta who long boards, the un–closeted gay man, the gun-toting libertarian, and so on. “Farrakhan is my co-pilot,” reads a sticker on a windshield projecting black power ideology. “God Hates Fangs,” reads another on the shared vehicle of an underemployed goth couple.

Asked where the idea came from, Donnelly explains, “I see this form of pop culture on a daily basis. Being a satirist, it was only natural for me to comment. I guess now I’m now the annoying one, but each windshield tells a story about the driver and the society we live in.” 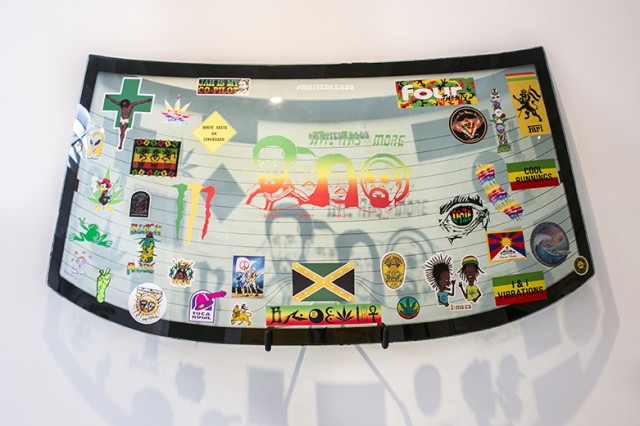 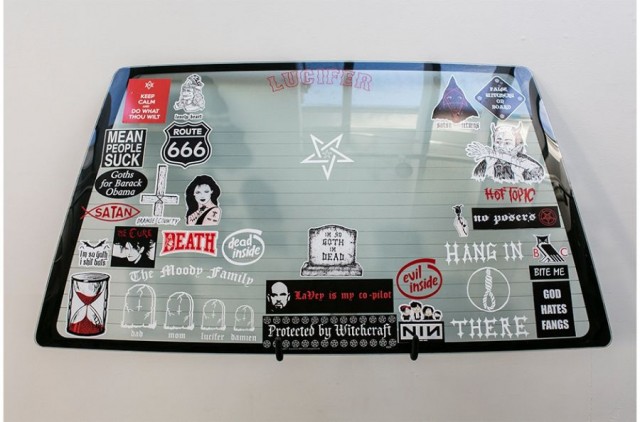 Sourced from junkyards across L.A., each windshield corresponds with its tribe. The goths drive a used Toyota, the angry libertarian a Ford. While many of the decals look familiar, Donnelly created the vast majority himself, hand drawing them or tweaking existing imagery. “At the opening people were asking if I bought the stickers or made them, which is exactly what I hoped for,” he remarks. “They couldn’t immediately tell the difference between my interpretation and what you see on the road.”

It is that blurred line which makes Donnelly’s work so sentient. It teases out the preposterousness of believing that a series of religious symbols, strung together to read “coexist”, might actually bring harmony to the world, let alone the Hollywood Freeway. It pokes fun at the narcissistic undertone of a cartoon family portrait that calls out each member’s name, including the dog’s. It asks why should we care that you voted for Obama, buy a certain energy drink, or take pride in your Irish heritage. 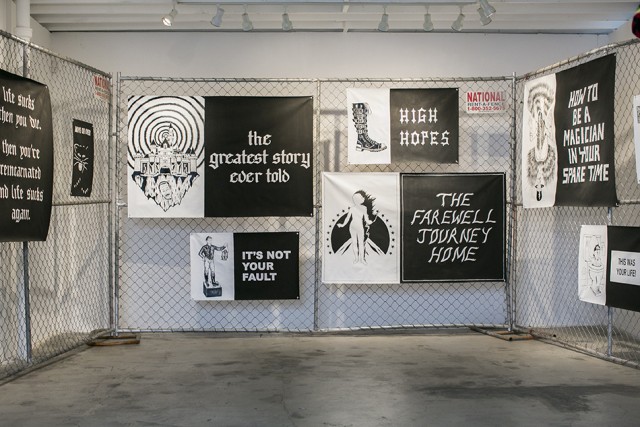 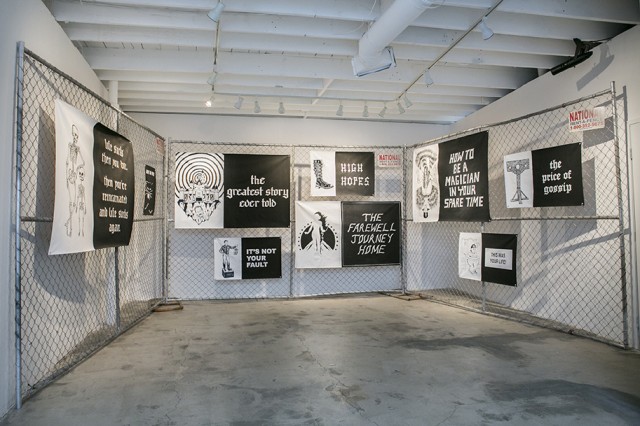 As for the bumper stickers he didn’t make? “The rest were bought at head shops or on eBay. I wish I could take credit for the ‘Nobama’ Nascar bumper sticker, but someone beat me to it—ha.” 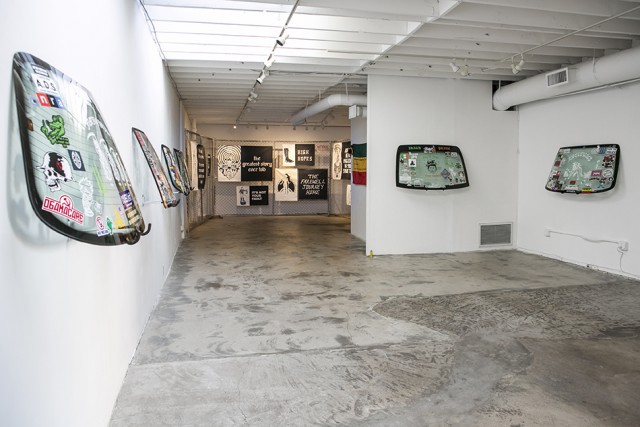 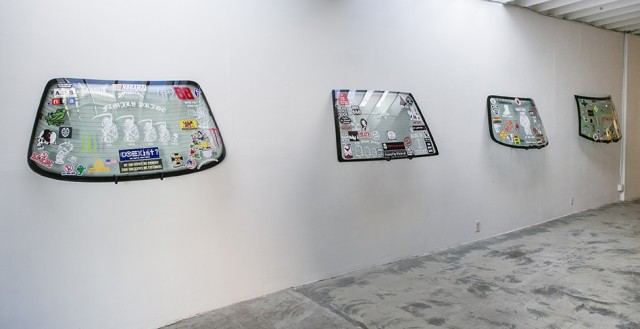 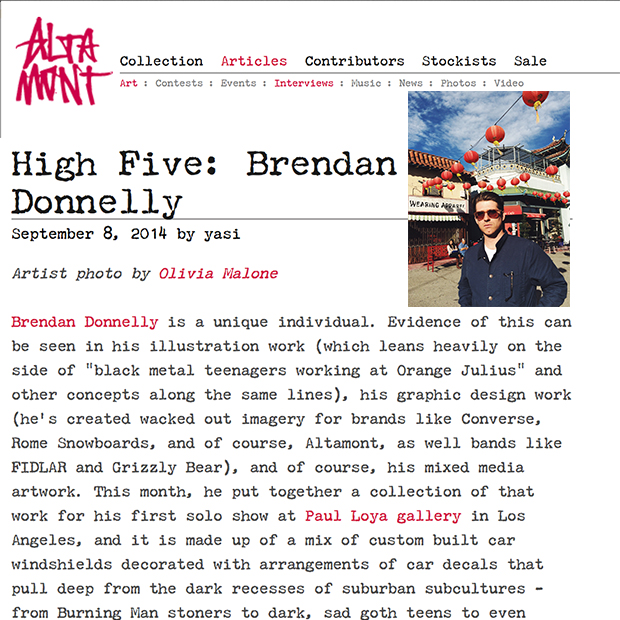 Brendan Donnelly is a unique individual. Evidence of this can be seen in his illustration work (which leans heavily on the side of “black metal teenagers working at Orange Julius” and other concepts along the same lines), his graphic design work (he’s created wacked out imagery for brands like Converse, Rome Snowboards, and of course, Altamont, as well bands like FIDLAR and Grizzly Bear), and of course, his mixed media artwork. This month, he put together a collection of that work for his first solo show at Paul Loya gallery in Los Angeles, and it is made up of a mix of custom built car windshields decorated with arrangements of car decals that pull deep from the dark recesses of suburban subcultures – from Burning Man stoners to dark, sad goth teens to even mega-Republican, MMA-loving bros. The rest of the show is made up of simple, black and white paintings arranged on a chain link fence to evoke the sort of community advertisements often found posted on the outside of elementary schools and the like. The show opened Sept 6th and runs through Oct 25th. We sent Brendan our High Five and much like everything else he does, his responses (and his willful disregard for the whole “five things” concept) are, well, unique: 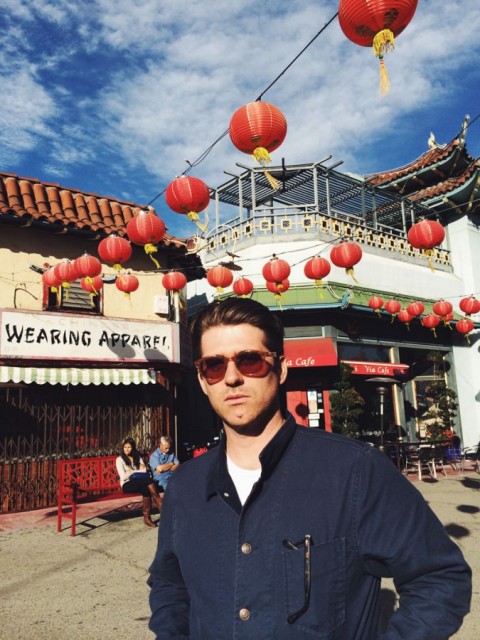 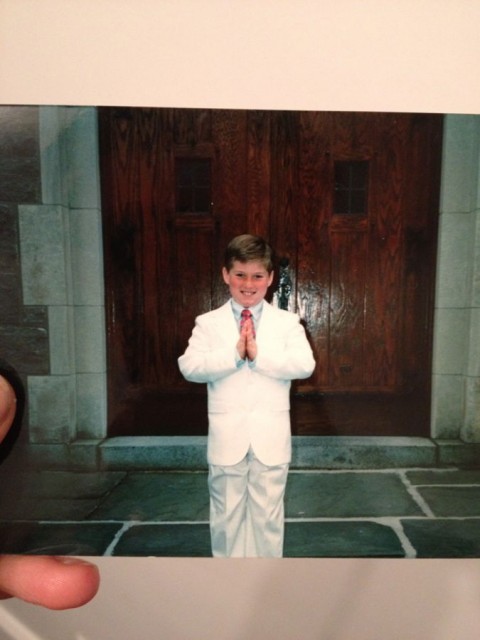 Top five Craigslist posts you’ve ever found:
From memory:
1. Anyone down to longboard? Just moved to the OC and looking fro new friends.
2. Femme hippie girl seen femme hippie girl (then went to list where they’ll go on their date and that they’ll pay separately).
3. A guy selling a piece of wood with Jesus’s face in the wood grain for 1 million dollars.
4. Are you Asian? Do you rollerblade?
5. Let me JO on your Crocs. 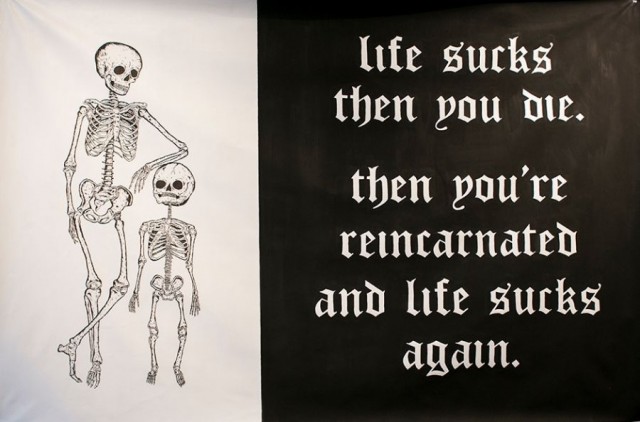 Top five favorite serial killers:
The serial killer direct-to-bargain bin movies which are now on Netflix are so bad they’re good. Can’t tell what’s worse, the acting or the action carried out.

Top five best internet search terms:
I just found out that a stock photo of me (which my friend took in college) is now used on a webMd type site for penis chaffing. Why I was doing that search is a whole other story.

Top five reasons the art world can eat a dick:
I’m not in the “art world” so ask me again in a few years, if I ever make it there and I’m sure I’ll have a list. 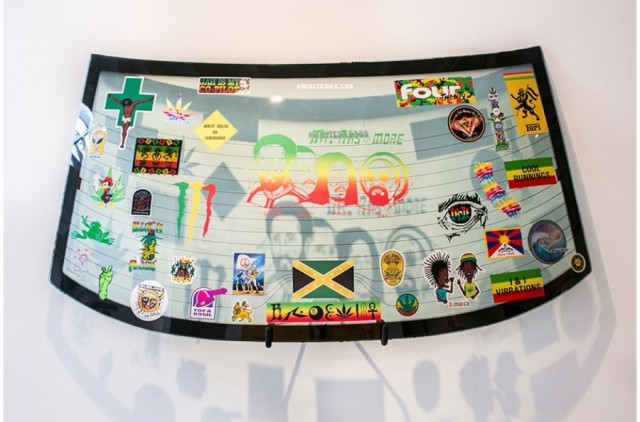 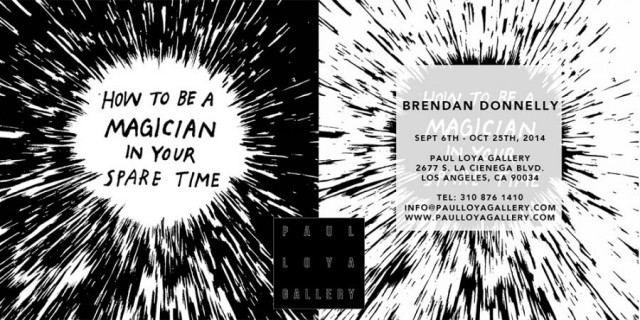 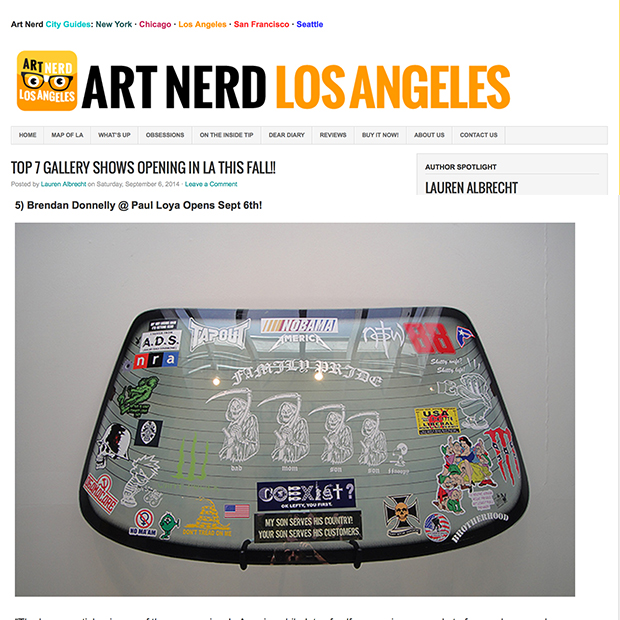 Thank you Art Nerd for ranking Brendan Donnelly’s solo exhibition, HOW TO BE A MAGICIAN IN YOUR SPARE TIME as one of the top 7 shows opening this Fall. Please click the link below to see the who else made the list. 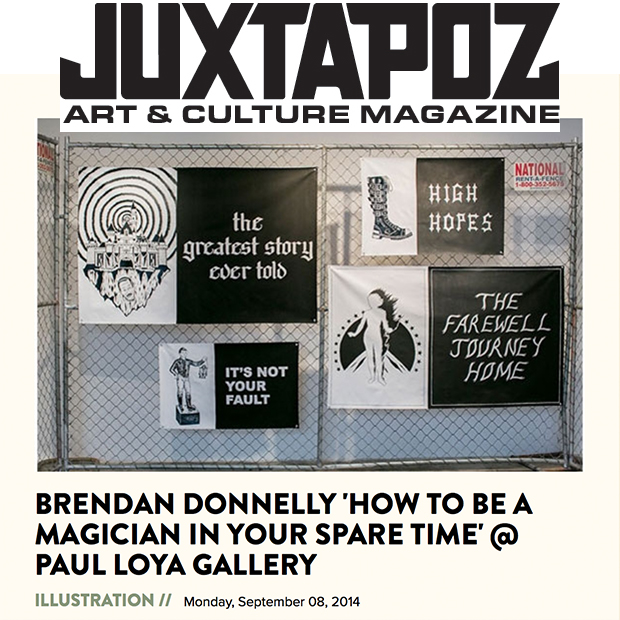 Thank you to Juxtapoz Magazine for covering Brendan Donnelly’s solo exhibition, HOW TO BE A MAGICIAN IN YOUR SPARE TIME. Please click the link below to go to the article.